“My favorite buildings are all falling down Nobody seems to know how long, All of these buildings belong, Till they become part of you” –

Action sequence of the artist at work: 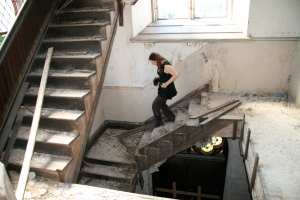 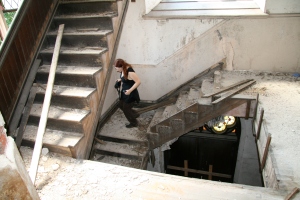 Made it to the landing! Go girl, go!

Very precarious stairs. Whole floors of some older waterlogged ruins have been known to collapse under the weight of a lone urban explorer.

Made it, let’s get that shot…

Julia Solis. Where to start? Well, she has a new book and it’s called “Stages of Decay” and you can buy it here: http://www.amazon.com/Stages-Decay-Julia-Solis/dp/3791348191 This book is the culmination of many years of exploring and recording spaces that, once upon a time, housed throngs of laughing, shouting and applauding people. Julia’s darkly beautiful pictures are, in one respect, simple remnants of bygone days, of a bygone humanity; her photos capture the essence of those times in their stellar compositions. That alone in an archaeological sense, would be cause to celebrate these singular images. Even so, if you peruse them carefully, you will recognize that they resonate on much deeper levels. The residue of spirits past seem to emanate from the wood and metal almost as though the crumbling foundations, tilting columns and precariously hanging chandeliers were irradiated during some terrible cataclysm – a flash of psychic incandescence that literally impregnated the very walls. As she says in her introduction: “Ruins symbolize the transitory state of human endeavors and show that even our strongest barriers against the forces of nature will one day crumble and collapse, even fortresses made to withstand whole armies and cathedrals designed to raise the spirit from the earthly muck into the heavens. No matter how grandiose, all would succumb to the dark embrace of rot, pulling the physical building back into the cycle of nature, inevitably ending with decay and decomposition. By touching on these powerful sentiments and becoming a visual reminder of mortality, ruins are the embodiment of drama.” 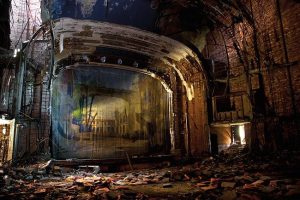 In the spirit of full disclosure here, I am compelled to admit that I have been the greatest fan of Julia and her work for nearly twenty years. I met Julia in 1993 while she was yet a core member of the Los Angeles Cacophony Society

In 1997 she moved to New York and began in earnest her life’s work of exploration, discovery and documentation. After co-founding the short-lived yet influential Brooklyn chapter of the Cacophony Society Julia founder the seminal UE cabal: Dark Passage http://www.darkpassage.com. Soon thereafter she co-founded the “above ground” underground group Ars Subterranea http://www.arssubterranea.org. Her first book, New York Underground http://www.amazon.com/New-York-Underground-Anatomy-City/dp/0415963109 is now a primary text for urban explorers the world round.  Published in German, French and English, it is mandatory reading in the field.

Julia’s life-long fascination with the ethereal and ephemeral as manifested in the decay and dissolution of the built world, provided the inspiration for her next work, Stages of Decay http://www.abandonedtheaters.com. A while back certain folk of small vision began to categorize the love for and fascination with the ruins to be found in distressed cities around the world as “ruin porn.” Perhaps they mistook the true depth of feeling that so many artists, photographers and explorers have for these singular spaces for some kind of callousness for the people and times past. This would be a simple enough mistake for someone who has not taken the time to truly appreciate the best of the work that a wide range of very talented photographers has been creating for many years now. Tom Kirsch   Troy Paiva ,  Joe Reifer  and preeminently, Julia Solis show, thru their wonderful images, a world gone, yet lingering. The value of these photographs is greater than the undeniable pure beauty they portray. These adventurous artists are recording for posterity a rapidly dissolving and disappearing segment of our infrastructure, our history, our essence. If anything, the best of the urban ruins photographers honor the past and those inhabitants long gone by preserving the darkly beautiful remnants of their forgotten worlds. Julia Solis, often as the very last witness, preserves images of worlds that will never come to be again. Worlds that once held sway over the imaginations and dreams of children and adults alike. The documentation and preservation of these worlds is a gift we should be very thankful for.

I’ll end with another passage from Julia’s introduction. This description in prose of the organic process that takes place as these ghostly edifaces return slowly to nature, is as beautiful as the images that succeed it in her new book, Stages of Decay: “With their abandonment, a whole new drama begins to unfold. It starts slowly at first, with a few open windows letting in the wind and rain, the snow and the spores for the first patches of moss to take hold. The expanding and contracting moisture plays accordion with the building materials until the top layer of paint begins to crack, often in a sharp, continuous stroke that sounds like a clawed animal scurrying across the wall. Plaster ornaments dissolve right on the wiring until they can no longer support themselves and their flower petals and flourishes melt into a soggy pile on the floor, forming an entirely different kind of sculpture. Horsehair, once used to hold together plaster decorations, begins to stick out between structural elements like strange, insect-like antennae, emerging to explore their new post-apocalyptic world. The seats burst, their stuffing sweeping into alien reptiles crawling down the stairwells. The stage curtain drops as its fireproof backing splits and bubbles into the moldy fabric, combining with the deteriorating floor of the stage into a fantastic fungal landscape.”