This book is out of print. It was published in full color large format hardback edition (5000 copies) of 320 pages (weighing almost three pounds!) in 2013. Our publisher Last Gasp of San Francisco is reprinting in paperback in a slightly altered version by the end of the year. This pdf is low rez but readable and the best I can do til the paperback is out. Please spread the word! The new edition will include a memorial page for Carrie Ann Galbraith RIP.

Carrie was the co-author and designer of this loving in-depth history of the Cacophony Society. One of her many contributions to Cacophony and the worlds of art, pranks and creativity was the concept of the “Zone Trip” the best known Zone Trip being the 1st Burning Man on the Black Rock Desert in September of 1990.

They were five events that the Suicide Club was best known for by the general public.

Climbing the Golden Gate Bridge was an ongoing activity pioneered by yours truly and a handful of others including Gary Warne, Peter Field, Jayson Wechter and others.

After the first several months of the club we didn’t publicize events, particularly the quasi-legal ones. Even so word slipped out about these ongoing excursions. 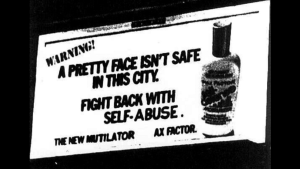 One of two Max Factor billboard “improvements” by The Suicide Club in September 1977. This event gave birth to the Billboard Liberation Front in December 1977.

The first pre-Billboard Liberation Front billboard alteration, Max Factor was a Suicide Club event organized by Gary Warne & Adrienne Burk that got a lot of local press when all 26 of us were arrested. I have commented on this elsewhere on my blog.

The annual Chinese New Year’s Treasure Hunt was founded by Gary Warne and Rick Lasky in 1977 as a Suicide Club event. It took place in the middle of the famous annual parade thru Chinatown and downtown San Francisco and came to be a well-known event over the years. Eventually it was piloted by Suicide Club alumni Jayson Wechter and it morphed into and remains to this day, a major public event. 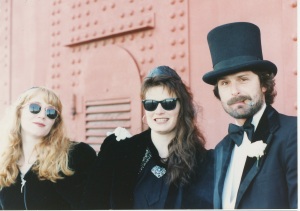 This was the first of hundreds of “formal dress” events taking place in non-traditional places over the next 40 years. 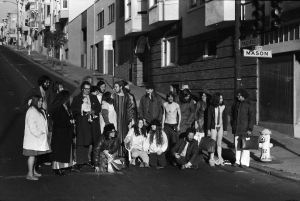 This event took place in the very first month of the clubs existence prior to our collective desire to begin avoiding any publicity for events.

The event was one of the few that were conceived of as a publicity prank. Gary Warne and Adrienne Burk put out a call for photographers in order to create a series of prank postcards. As I recall there were at least three possibly four photographers. Over the decades since, the identity of most of these photographers was lost to me, and probably anybody else interested in the subject. From Gary Warne and Dave Warren’s archives, much of which I had inherited when they passed away,  I was able to find contact sheets from an unknown photographer which are the images that have been posted in a variety of places over the years. These images are secondary photos shot of tiny 35 mm proof sheet images. They are very crappy.

Recently, one of the Suicide Club stalwarts of those first few years, Bob Schlesinger contacted me with the wonderful news that he had found his original negatives. And so for the first time that I know of, some decent shots of this epic prank are now available for you to enjoy – or not – if you choose! Child advisory. Nudity!

Here is the email that Bob sent me giving a little bit of context for how he shot the photos. It also describes some of the humorous chaos that could be part of a Suicide Club event.

“John, Here are the 4 group pictures with specks & scrapes cleaned up, plus 3 of the cable car pictures.   Feel free to post, send to Bob Campbell or anyone else.   As you can see, the ones on the cable car were not nearly as good quality and they needed a lot more work to clean up – there were so many specks it looked like dandruff.

As far as memories go – they are a little hazy after 40 years, but I do remember that several people had cameras.   As you know, Gary was not keen on cameras being used at events – this one being one of very few exceptions.        I also recall that I had decided to shoot in black and white because it offered more latitude with regard to exposure than color film.  I had no idea what kind of lighting we would encounter that early in the morning; whether we would be in direct light, shadows, or a mixture of both.

I remember I had taken a picture of us trudging uphill to the barn but I haven’t come across it yet.  It was a wonderful group procession – many of us wearing long dark coats traversing the empty city streets of very early morning.      I still recall the reaction of the cable car brakeman when we disrobed.   He gave us a classic eye roll. 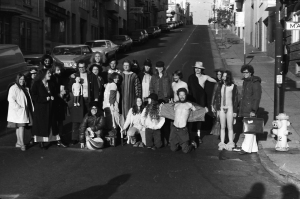 I remember that after I had dropped my pants, for some reason I didn’t completely remove them, but they were down around my ankles.   Maybe I didn’t want to take any extra time and miss photos, or maybe I hadn’t figured out how to hold the camera and keep track of my clothes at the same time.   I have no idea how I staggered off of the cable car that way, but I do remember that it was challenging to move around to take shots.  – Bob”